Archery in the Scottish Highlands

"they drink bloud out of the wounds of men slaine: they establish leagues among themselves by drinking one anothers bloud and suppose, that the greater numbers of slaughter they commit, the more honour they winne: and so did the Scythians in old time. To this we may adde, that these [wild] Scots like as the Scythians, had for their principall weapons, bowes and arrows." (Camden)

We have looked at the forms and context of Gaelic archery in this post. Now I want to address some of the ways in which the bow was used North of the highland line. For this I am using contemporary or near contemporary sources, Froissart,Boece Martin Martin, the Dewar Manuscripts etc.
Earlier medieval sources rarely dealt with the highlands, an area considered too dangerous for travel. The highlands remained an area of speculation, myth and rumour. However some of what was related in these earlier texts is corroborated by other evidence and sometimes the accounts can be verified through their own merit, often (and most amusingly) when the information is discordant with the politics of the time. Examples would be cooking techniques which are referenced in Boece and in the Dewar manuscripts or the rather odd description of highlanders serving as guards to a particularly Gael-unfriendly  King of Scotland.
Early texts frequently talk of highlanders living by the hunt which probably reflects lowland ignorance more than mundane agricultural reality. Hunting was a part of the highland economy both as a leisure pursuit of the Clan nobility and as a subsistence activity by ordinary clans people. Hunting licences were issued by MacLeod's forester and poaching is also attested to. The wolf was also hunted up to its extinction, probably in the mid 1740s.
Leslie talked of highlanders being able to hit a "deer in his speede" and the famous woodcut of 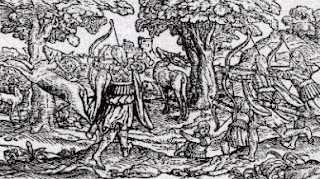 (sources on request, please don't use orginal material here without consent or at  least acknowledgement).
Posted by N Matheson at 03:41