At the famine village in Doagh, Donegal we were shown the 6.8 kilos of potatoes the average Irish man was eating before the famine.
This was by no means a chosen diet but was more the result of British colonial misrule. The potatoes alone resulted in a whopping 5916 calories and provided a fairly robust diet though with major deficiencies, notably in fat 10% and a slew of vitamins B12, A, D etc. Additions of fish, dairy products and some meat (there was quite a bit of wild food eaten in Doagh) would have rounded out the diet make it livable but the average calorie intake must have been higher still. Dr William Short came up with a 10,000 calorie a day figure for his Assessment of Icelandic diets The Icelanders in the 10th century were very healthy by contemporary standards and Icelanders remain some of the healthiest people in the world today. Archaeology shows that 10th century Icelanders did not suffer from nutritional deficiencies. While the RDA of many nutrients and vitamins is based on the minimum to avoid deficiency ,eating the RDA of protein causes muscle loss for example, and doesn't take account of different dietary compositions (the absence of grain/starches greatly reduces the need for vitamins C) intakes at this level meet and exceed the RDA for every nutrient the body requires. Most calculators don't account for the anti-nutrient effect of some foodstuffs particularly whole grain foods but it is clear that according to modern nutritional science Icelandic and Irish farmers could eat a healthy nutritious diet, though they were working at levels which would seem extremely strenuous today. Scaling back this diet to meet modern calorie requirements of just over 2000 calories a day might not result in nutrient demands being met, especially given modern soil depletion and our generally indoor lives.
This lengthy preamble was a way of getting to some 16th century ration lists I found for English armies sent to fight in Ireland. Ireland was considered a very hard duty and had very low survival rates, sort of a mix of Vietnam and the Eastern front but with far more rain.We should assume that the diet was enough to sustain the men though was probably just enough to do that, armies are not known for overfeeding men, 16th century armies also suffered from serious supply difficulties and dishonesty at every level. The following should be seen as an "ideal" ration, it ran for a long time and was repeated so was probably satisfactory. Also note the absence of alcohol which suggests a complete picture isn't being given as alcohol was drunk in large quantities throughout this period.
Per day men were issued 1.5 lbs of bread or 1lb of biscuit, butter at 1/2 lb for two days and 1/4lb for two more, supplemented by porridge one day and pease the next. Cheese on two days at 1lb 2lb of salt meat one day a week or fresh meat at 2.5 lb or pork or bacon at 1lb. 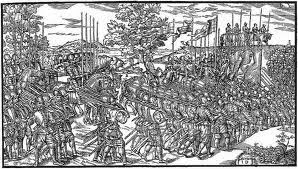 Ten and a half pounds of wholemeal (presumably) bread gives 12624 calories 1.5 lbs of butter gives 4878 calories two pounds of cheese 3171 (surprisingly low!) one pound of salt pork gives 3248 whilst a pound of bacon gives 2454. Another source gives a meat ration of 1.5 lbs per day per man assuming salt pork as a generic and not terribly expensive ration meat gives 4872 calories per day or 34104 per week . A quarter pound of porridge (oats) gives 70 calories and sadly my calorie and nutrition counter doesn't "do" pease so we'll double up the porridge to 140 calories per week. With meat one day a week we have a weekly total of 26525 calories for a low 3787 calories per day. With meat (salt pork) every day gives 54917 per week or 7845 per day closer to levels for Irish farmers in the 19th century. Modern British army rations contain about 4000 calories while the (in)famous K-ration provided less at about 3000 calories. K-rations resulted in malnutrition in troops who relied on them for the bulk of their nutrition and modern military rations are not intended for long term use. So it would seem that the additional meat ration would be required to keep a 16th century army on the move and in reasonable health. With the quantity of grain a salt meat ration would potentially result in scurvy, fresh meat or local vegetables would prevent this.  Given that this food ration weighs in at 15.5 lb per day, with a large army of 3000 men it would take over 23 tons of food A DAY to keep them fed to this level.Even a less exceptional and smaller army of 1483 men such as that which faced Shane O'Neill in 1569 would require over 11 tons of food a day. This figure though minus Kern does not account for the quantities of powder and other materials of war, let alone fodder for horses.While figures lower than this would be both likely and possibly sustainable on the short term much lower figures would seriously affect the army's ability to function. The Minnesota Starvation experiment had a starvation ration of 1500 or so calories a day which resulted in major adverse effects in the subject's performance and even mental health.
Figures like this make us realise just how effective scorched earth policies were, or how effective pastoralists such as the Irish/highlanders moving their herds was at limiting the effectiveness of  conventional armies. While English armies carried as much food as possible "on the hoof" the large baggage trains of Elizabethan armies must have seriously hampered their ability to pursue war in Ireland. While it is tempting to believe (as contemporary writers did) that Irish and redshanks were more nimble and physically capable than their lowland or English neighbours a great deal of their manoeuvrability must have come from the lack of supply trains in Gaelic armies. Kern were famously good at raiding and obtained much of their food "off the land" on campaign, an ability put to good use by Henry VIII in France. While operating in their own, friendly or at least not-hostile lands Irish armies could obtain much food locally.
We must not be too quick to dismiss the cross-country abilities of Gaelic armies, the English could not bring Irish armies to battle and looking at maps or historical reports immediately impresses upon one the shocking speed and manoeuvrability of Gaelic forces. Montroses' famous move to Inverlochy over avalanching mountains being a great example of a feat it being almost impossible to imagine a conventional army performing, feats repeated on an almost weekly basis by the army taken into England by Prince Charles in 1745 during a harsh 18th century winter.
Succesful Irish viceroys did not commit to the field without specific objectives but with control of the seas and later in Scotland Wade's roads some measure of control was obtained through forts positioned at strategic locations Derry, Inverlochy etc. Burt states clearly that forests and woods were cleared from roadsides to prevent ambush in Scotland a tactic that pre-empts American defoliation programs in Vietnam. Yet even with garrisoned forts it appears that direct control over large areas of Ireland or the highlands was considered impossible and indeed attempts to supply Inverlochy by land were stopped due to the risks involved.