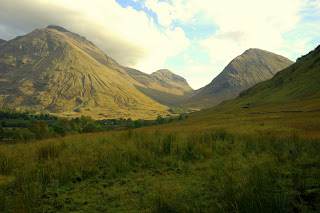 "Men bred in the rough bounds" while their clothing culture and arms were considered distinct from mainstream European culture, the physicality of the highlanders was also remarked upon by contemporaries. The following is a general view. Much changed over the centuries in Agriculture and culture but is factual in general. Changes in climate (especially severe in the 16th-17th centuries) will also have affected practices.
The Highlands while not entirely homogeneous can be characterised as rough mountains with unpredictable weather (to say the least) and a land not particularly suitable to arable farming. Pastoralism and fishing were the mainstays of the culture though wherever possible crops were grown. Lazy beds, that is fields made from sea weed were also used to increase crop land. 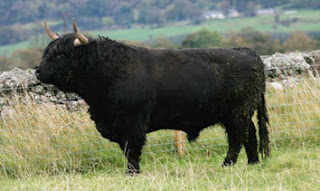 Cattle, sheep chickens and goats were the domesticated animals of choice Highland cattle are still famous for the quality of their meat and at the time were famous for their marbling. I have read contradictory things about deer in Scotland, both that deer were hunted exclusively by the clan elite and conversely that they were free to be hunted by all men. I suspect the former to be true as my sources for this are older and it makes more sense in a feudal system. Whether this protection would extend to the smaller Roe deer (it didn't in England) or other smaller game I can't say. Poaching and gamekeeping are attested to in period sources Martin Martin states that deer "licenses" had to be applied for on Lewis but does not mention any social distinction in their allocation, tracts were set aside exclusively for the Chieftain's hunting.
Sea food was a major source of nutrition to those in reach of the sea, Scotland is  famous for the quality of its sea food, in the 16th century Scotland provided much of the fish for England and the Low Countries. Herring were a staple of most Europeans and salted and hung in the rafters could provide (pretty tasty) calories during the "hungry gaps of the year" "The natives preserve and dry their herring without salt, for the space of eight months, provided they be taken after the tenth of September, they use no other art in it but take out their guts, and then tying a rush about their necks, hang them by pairs upon a rope made of heath cross a house; and they eat well, and free from putrefaction, after eight months keeping in this manner."

Sea birds and their eggs were also consumed sometimes in vast numbers. I have seen fish traps in the Western Lochs which work by stranding fish at low tide in artificial rock pools this must have provided a some pretty easy meals for communities on sea lochs. A friend from Lewis also taught me how to make salmon weirs which work in a similar fashion. Mesolithic middens attest to the importance of shellfish in the diet going back beyond agriculture,  I have also read that silverweed and other wild plant foods were important starch sources for upland peoples before the introduction of the potato.
Dairy products are of incredible importance to a pastoralist people. Highlanders practised transhumance and lived in sheilings with their herds in the summer months butter and cheeses would be made to preserve the milk which was presumably not drunk in any quantity.
I have eaten wild blueberries on the tops of Glencoe, hazel trees grow in the sheltered valleys and honey was also produced however sugar would presumably not be eaten at all by anyone save the very rich or connected . So we can see that Highlanders had access to a fairly wide range of food stuffs but we must be aware that life was hard and getting enough to fuel a life spent farming in a marginal environment must have been a struggle the year marked with a feast/famine cycle without the amelioration of an established market system or extensive grain storage.
Martin Martin was a highlander, and was in a position better than most writers to tell of the Islands in which he lived. He was a sober writer though his work deals often with mysteries and miracles. Of the highland middle class ,he was a Tacksman, he has been accused of not understanding the differences between the clans system and mainstream European society  he wrote in the 17th century. 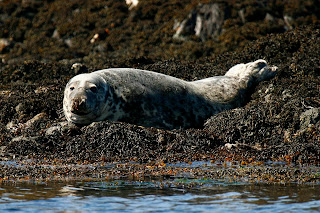 Martin describes an Island economy which was rich in corn  and made great use of the rich seas the common people ate a great deal of meat from marine mammals "This I have been assured of by several persons, but particularly by some poor meagre people, who became plump and lusty by this food in the space of a week: they call it Seapork, for so it signifies in their language. The bigger whales are more purgative than these lesser ones, but the latter are better for nourishment........The amphibia here are seals and otters; the former are eaten by the vulgar, who find them to be as nourishing as beef and mutton........The natives salt the seals with the ashes of burnt sea-ware, and say they are good food: the vulgar eat them commonly in the springtime with a long pointed stick instead of a fork, to prevent the strong smell which their hands would otherwise have for several hours after. The flesh and broth of fresh young seals is by experience known to be pectoral; the meat is astringent, and used as an effectual remedy against the diarrhoea and dysentery; the liver of a seal being dried and pulverized, and afterwards a little of it drunk with milk, aquavitæ, or red wine, is also good against fluxes." 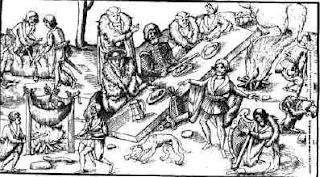 Froissart in his 14th Century chronicle written from his own and others travels writes that the Scots were hardy and simple, able to march 20-24 miles in a  day, they used no baggage train but lived off the land eating only sodden meat and drinking river water. He states that they used no pan but cooked animals in their skins. They carried bags of oats with which they made oatcakes cooked on small metal griddles. He adds that they were capable of outmarching and outmanoeuvring any army.  He makes no distinction between Highlanders and lowlanders but we can easily recognise this description in descriptions of later Jacobite "hill skippers", perhaps Froissart is describing only Highlanders or perhaps all Scots marched this way in the medieval period. Cooking animals in their skins is seen in many depictions (such as Derricks images of Ireland)  of Irish armies and described in the Dewar Mss.
Silvius states that the Scots lived on a diet of fish and flesh whereas bread was a luxury. His account of the highlands being a land of woods possessing no tilled land reads like hearsay and we should treat his reference to Highlanders eating wood with suspicion. Pine cambium has been used by other cultures to make a starchy flour though. Indeed the meaty ways of the Highlanders are related by a few period writers with one writer maintaining that Highlanders ate meat raw after squeezing the blood from it. Blood was also drained from living animals and mixed with oats to make puddings by drovers on the move.
Cattle and other livestock were slaughtered in the autumn and salted for preservation cattle were wintered within the house and were frequently too weak to stand in the spring despite the toughness of highland breeds.
Pork was spurned, in the French Indian war Highland troops threw away their salted pork rations on patrol. This probably stems from a religious proscription (And the swine, though he divide the hoof, and be cloven footed, yet he cheweth not the cud; he is unclean to you.Leviticus) though these soldiers at least were "happy" to eat pork when they realised they had no choice.
There was a dog-like pig raised in the Highlands though now extinct. I cannot find reference to this animal being used for food. Cattle were rarely eaten especially after the concentration on ranching in the 17th Century. Sheep were eaten frequently and theft of sheep (unlike of cattle) was a capital offence. Goats were also kept.
It is hard to talk with any certainty about the ratios and make up of meals from the choices available. Certainly in coastal communities the fecundity of the oceans would make fish at every meal a real possibility but as with nearly every other society in Europe cereal grains presumably made up the single greatest intake of calories with declining importance up the social scale. This could well have lead to problems with scurvy and iron deficiency problems when the supply of meat fish or vegetables ran out. Local wild foods certainly were used to help with these agricultural problems, nettles ,for example, are an excellent source of both iron and vitamin C.
Plant sources are discussed less commonly than animal foods in the period sources, perhaps displaying a bias to more "noble" foods or areas of male preserve or that animals foods were considered to be more useful/important. Alternatively vegetables and plant foods were eaten less commonly as is the case in many Northern cultures.Boswell noted in the late 18th century that a poor family "  will live all the spring without meat upon milk and curd, etc.., alone. " but he also noted a garden "gooseberries, raspberries, currant, strawberries, apple-trees." he also describes eating turnips, greens (probably kale) though by far the main repast is flesh.
On the Islands seaweed was eaten and kale has a long and famous association with the highlands with kale yards (walled gardens to protect the kale from the wind) featuring in many folk stories. Onions were also mockingly associated with highlander penury in the 17th-18th centuries.
The highlands themselves are a hostile environment in which to farm while there were many sources of food shortage and hunger must have been endemic at points of the year and famine or bad harvests making life hard for those wresting a living from the hills. Highlanders were (and are) shorter than other Europeans but were healthy in comparison according to contemporary sources and though the Scottish diet is today synonymous with tunnocks tea cakes and clogged arteries it was in recent history wonderfully healthy, Indeed in the 1930's residents of Lewis were used as examples of healthy living by the Dentist Weston Price in his exemplary work.

In the next post I will go on to look at the exercises, martial arts and physicality of the Gaelic culture.