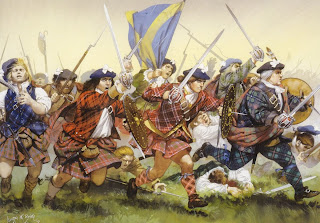 There is at present a bit of a trend among writers of highland history to reform the old sword and targe armed highlander, as with most revision it seems to be based more on a desire to denounce past interpretations (in the old academic tradition) and paints an equally skewed picture. Mostly this is in response to ‘shortbread tin’ Jacobitism and deals with the chaotic events of the 18th century. Of course I am dealing with an earlier period but I think it might be worth going forward in time a bit to see if the “unarmed” peasantry argument stands up to scrutiny.

The argument is mostly based on revising the old 19th century image of tartan clad paladins leaping from the heather, sword in hand in a desperate bid to put their bonnie lad on the throne, or indeed modern neo-barbarians who view the Highlands as a kind of aboriginal backwater with Highlanders clinging to their “medieval” fighting styles. The revision states that instead of using backsword and targe, highlanders were mostly unarmed save a small military elite and, given the poverty of the area in the 18th century, ordinary highlanders were pressed into service and were armed with agricultural implements before being equipped with muskets and drilled to fight in an almost conventional fashion.

Certainly the hostile witnesses of Edinburgh give much ammunition to this interpretation as does the famous weapon count from the field of Culloden in which 2320 muskets were found to 190 broadswords (with 1000-1500 casualties). The perceived lack of melee weapons in the ’45 highlanders is then cast back into the past to reflect the situation among all highlanders in history. 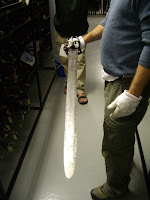 With “Tuchman’s law” fully in our minds let’s look at the evidence for a poorly armed ’45 rebellion; certainly the Jacobite army that captured Edinburgh and trounced Cope’s army were a poorly armed bunch which, frankly, we should expect. The Highlands had been cracked by Wade’s roads and had been garrisoned for more than a generation. The Royal navy patrolled the waters and numerous disarmings had taken place with varying degrees of success. I cannot and would not argue that the army that assembled in Glenfinnan in 1745 wasn’t a shadow of previous Highland armies. I would however argue that swords were probably present in some number and across all classes of society. This indeed is my main point; it is the argument that it was the highland elite that alone were armed that I think is not supported by the evidence.

Woodhouselee’s scathing description of highlanders in Edinburgh is often cited as evidence for the poverty of the highlanders arms leaving aside his obvious Lowland bias it is clear that many highlanders were of indifferent quality but even among the reluctant and uninterested there were swords “ a boy stood with a rusty drawen sword”. A “volunteer” for the Jacobite army was released when it became clear he was too infirm however his sword was taken from him, a 14 year old sword armed boy was presented to Prince Charles after the battle of Prestonpans, having killed 14 with a sword. Having roundly defeated the Government forces the Jacobites could have availed themselves of their muskets, bayonets and swords. Swords were indeed worn by all soldiers in the early 18th century and it is likely that the French supply drops 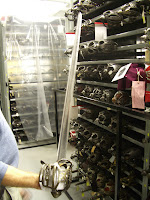 After Prestonpans it would appear that most highlanders could have been armed with swords (and muskets) if they so desired ordinary highlanders are often described as being armed with swords and their lack is not mentioned after this point. However the Jacobites certainly did have an absence of targes. Targes were discarded on the infamous night march which suggests that this archaic weapon was in short supply or unwanted by the highlanders in 1745. In the words of the 18th century fencing master “I reckon a Man that does not understand a Target, better to want it, than to have it” Targes were hastily ordered from craftsmen in both 1745 and 1746 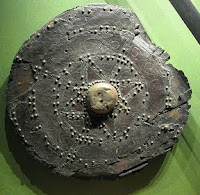 Colonel Olgivy ordered his officers to supply themselves with targes. It would appear that even the upper ranks of the clan system were poorly equipped with targes though presumably well furnished with swords.

So we have some accounts that describe the highlanders being poorly armed but even the lower ranks having some melee weapons before having the pickings of the battle field. Accounts of the composition of the Jacobite army and some of the grotesque ways in which it was formed also place swords in the hands of ordinary folk. The famous sketches from Penicuick are also available to give us an idea of the composition of the highland army. Of 32 highlanders clearly depicted at least 24 (75%) are armed with swords. This includes Highlanders from the top of clan society to bundles of rags with rotting, ripped scabbards. Targes appear in fewer cases (13 or 40%) and often where the subject is clearly a person of some standing (I.e. named) or wealthy.

Earlier in the 18th century the road building Edmund Burt says that drovers (clearly not gentlemen) were given permission to carry arms and did so, dirks were rather disingenuously not considered to be arms. 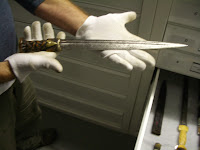 Hopefully I have managed to start to persuade you that the modern idea of a gentry armed in the full highland fashion leading a mob wielding sticks and stones is not what is presented in the contemporary sources, nor is an army entirely comprised of bearded, sword and shield wielding berserkers. Indeed while the rich would obviously have been armed in a better fashion it would seem that those lower in the clan system could be armed at least as well.

cannot account for the 190 broadswords recovered from Culloden field. Overall the number of arms gathered appears to be in low with 2300 odd muskets being shared among 7000 (33 %). Contemporary accounts of the battle tell of muskets being discarded still charged, swords being gathered off the field and buried and what are we to make of the one knife listed among the arms? Given that archaeology has revealed that mortars were present on the field (unlisted among the Government army inventory) maybe we should be aware that people were not perhaps as concerned with the details in the 18th century. Some finds from the field show weapons being damaged by the massive volume of fire directed at the highlanders it may be that only saleable items were counted I honestly don’t know. The figures throw up an interesting question in light of the other sources but are not (as is so often done) the basis for determining the composition of the army, and certainly can’t be used to arm Highland forces retrospectively.

I will look at earlier forces in my next post……

I will back this up with sources if asked, please do not use my photos without permission. I won't use the commonly seen penicuick sketches as they are quite poor copies buy the book by Iain Gordon Brown and Hugh Cheape 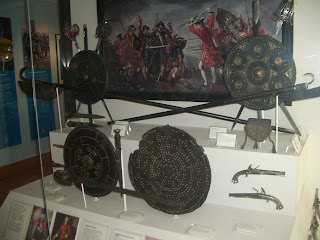