The bow commission I made with Mike Roberts is proceeding, Mike has been very busy recently but I am assured it is very much in the works. Now my mind turn to the accessories of the bow, namely quiver, hand guards and bracer.

Firstly we have to say that none of the above are required for archery. Many modern archers from traditional or primitive cultural backgrounds do not use any protective equipment. Images from the medieval and Renaissance also show that archers were at least depicted without using such equipment.
Bracers, that is a piece of stiff material worn on the bow arm to protect said limb from the impact of the bow string are known from archaeology. Made from archaeologically visible substances such as stone and bone. One only needs to be struck once in the arm to realise the utility of such an item, being struck on the arm with a full weight warbow would be potentially damaging. Self bows having a low brace height (distance of string to bow) and quite commonly strike the archer on the tendons of the wrist. While recurve archers are more likely to be struck on the upper part of the arm.
Modern bracers are made of leather or plastic while medieval examples look like leather with a horn or bone plate providing the protection for the vulnerable tendons. Far more minimalist than modern "medieval bracers" medieval designs show the limitations of the material available to them and the general thrift of people in the past.  The amount of leather considered to have been worn in medieval times is more a result of the limits of Hollywood prop designers minds than agricultural reality. Leather was available but was required for a very wide variety of uses all he way from belts and shoes to drinking vessels. Horn and bone also provide much better protection against the frightening force of English warbows. Tales abound of modern warbow users doing themselves injuries including injuring the wrist tendons.Ascham
"Litle is to be sayd of the braser. A bracer serveth for two causes, one to save his arme from the strype of the strynge, and his doublet from wearynge, and the other is, that the strynge glydynge sharpelye & quicklye of the bracer, maye make the sharper shoote. For if the strynge shoulde lyght upon the bare sleve, the strengthe of the shoote shoulde stoppe and die there. But it is best by my judgemente, to gyve the bowe so muche bent, that the strynge neede never touche a mannes arme, and so shoulde a man nede no bracer as I knowe manye good Archers, whiche occupye none. In a bracer a man muste take hede of . thinges, it haue no nayles in it, that it haue no bucles, "
There is far less evidence for hand protection, Roger Ascham in Toxophilus considers hand protection useful, not vital and indeed mentions that some archers shot barehanded. A shooting glove was ordered for Anne Boleyn by Henry VIII "Bowys, Arrowys, shafts, brode hedds, bracer and shooting glove" and an example of a shooting tab is known from about 1500. It was made from pig skin and is thought to have been made for a child.
How common the use of a shooting glove or  tab was is not clear, they are rarely depicted in art and Ascham does suggest something of a heath-robinson technique of placing flattened goose quills in a glove
To me the Ascham source suggests that protection for hands was ad-hoc, a good idea perhaps not generally practised. Certainly a glove would be an expensive item, though tabs would be well within the means and ability of all.

Enough of this! to quivers......Okay lets get one thing clear backquivers really, really annoy me. This is an almost amazingly impractical way of carrying arrows and of course totally invented by the crazed minds of Hollywood props masters. Just like the insane stiff leather vambraces worn by nearly every fantasy or medieval character. For some reason there has been considerable bleed over into reality and back quivers are used extensively by modern archers. Even reconstructions of historical or prehistorical figures occasionally feature back quivers.This figure of Oetzi has him carrying his quiver on his back. My Friend Leonard Henry was given short shrift when he suggested that this was not only inaccurate but also failed to demonstrate the sophistication of the quiver.
The stiffening rod of the quiver is a feature common on Native American bows and is for holding the bow across the belly. A position which means the quiver can be easily accessed and controlled when stalking. The projection of this rod means that the quiver could also be used as a ground quiver when hunting from a ground blind or indeed fighting. The protective caps on the top of the quiver would serve well in protecting the fletchings but also in stopping the flechings from rubbing and making tell-tale sounds.
Back quivers are extremely hard to access and slow to use (films use CGI to get fluidity and speed) when you bend over the arrows fall out, if you are carrying different types of arrows it can be hard to find the one you need. Lastly arrows carried on the back snag on trees all the time. Most importantly there is no evidence at all that arrows were carried in back quivers in Europe.

So how were arrows carried? In hip quivers, suspended by a baldric around the neck or belt, carried in the hand, transported in wicker baskets and issued during battles shoved in the ground or thrust through the belt. In Gaelic contexts we have images of arrows being held in the hand thrust through a belt and worn in a
hip quiver largely depicted being suspended from the waist. Certainly for the battles described in some highland histories a means of carrying arrows would be required, while in prepared ambushes arrows could be set in the ground. I suspect that in larger engagements arrows were supplied by the state, king or clan as they were for English armies. Arrows cannot really be carried in great quantity so for large engagements some form of re-supply would be required. For highlanders the end of the supply of arrows characteristically meant the beginning of hand to hand combat.
Quivers were likely made from linen canvas or leather.Medieval and
Renaissance English quivers were  sophisticated affairs that used a spacer to keep the arrows separated and rode high to protect the fletchings. Draw strings allow the arrows to be drawn from the top or bottom. Gaelic quivers seem (none survive) to have been rather more simple tubes of leather or canvas stiffened with leather or wicker. Leather might offer greater weather-proofing and hold its shape better when sodden, it is surprising that no protection for the fletchings are shown, these may have been shielded by the plaid or brat. Barbarian style deer hair quivers don't appear likely and the chape depicted on this image is without parallel. 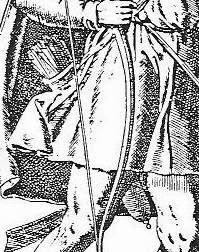 Within the parameters of;
it would seem there is a great deal of lee-way in any potential  quiver for a Gaelic warrior.