I had an article on Gaelic archery accepted by a U.S. publisher. The publisher asked for some photos to illustrate the article. This led to me speeding up my impression somewhat, so the accompanying photos do not necessarily reflect historical accuracy but do give something of historical flavour without any overt or egregious errors. 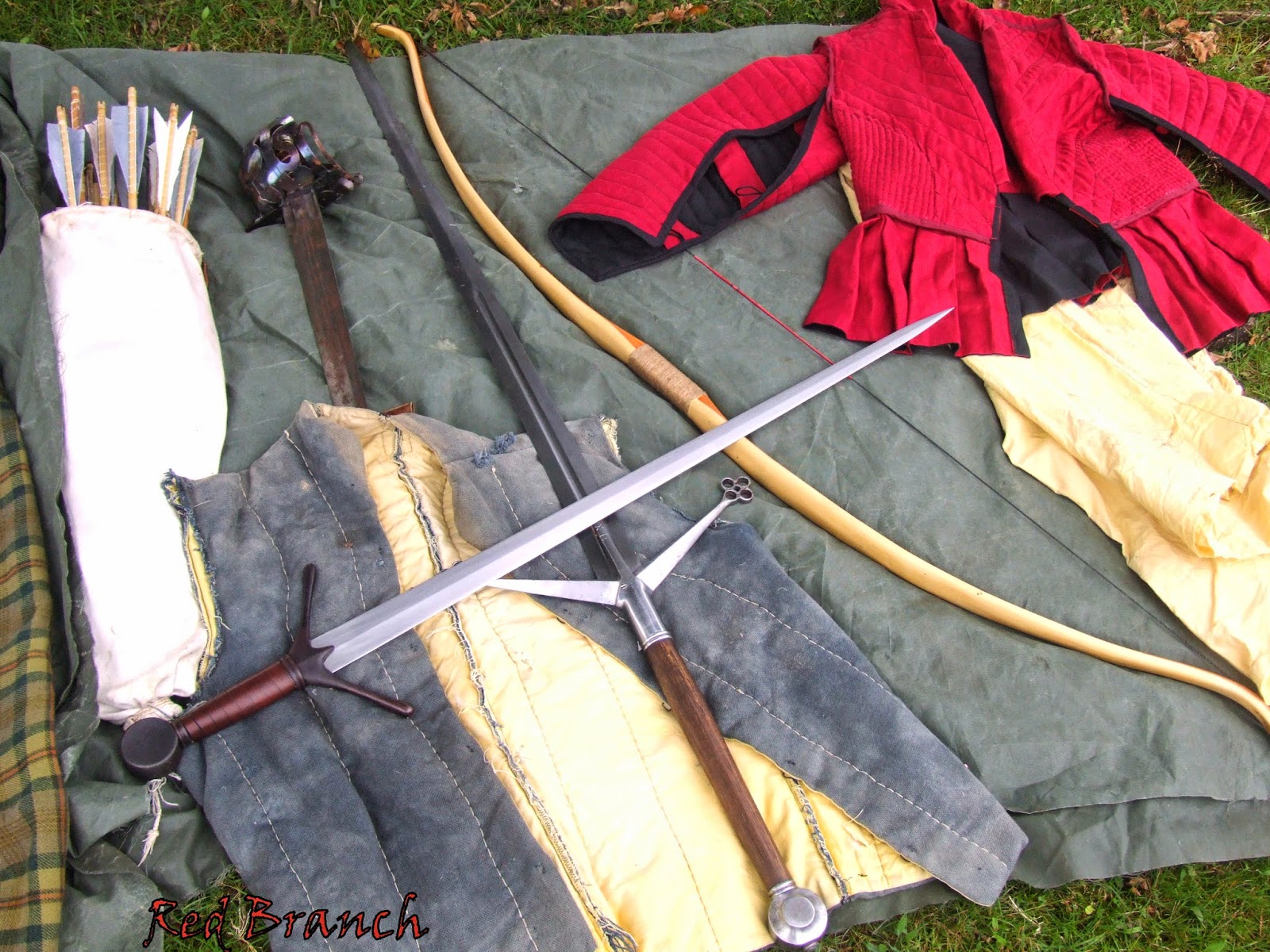 I borrowed some weapons and an ionar and leine from my friend and fencing instructor Lyell Drummond and found a nearby heath that looked suitably Scottish. I went for a general Gaelic 15th-16th century look. The only glaring inaccuracy was the dirk which is very much a 17th century design, however I tucked the handle away so it just looks like a generic big dagger. I would like to have a bit more in the way of scabbards and baldrics but am still working on getting something made. I would also have liked to have got the clothing to look a bit more lived in (dirty!). The photo shoot itself was rather rushed and full credit to my wife who managed to take great pictures while holding a baby in one hand and dealing with a pesky three year old too! 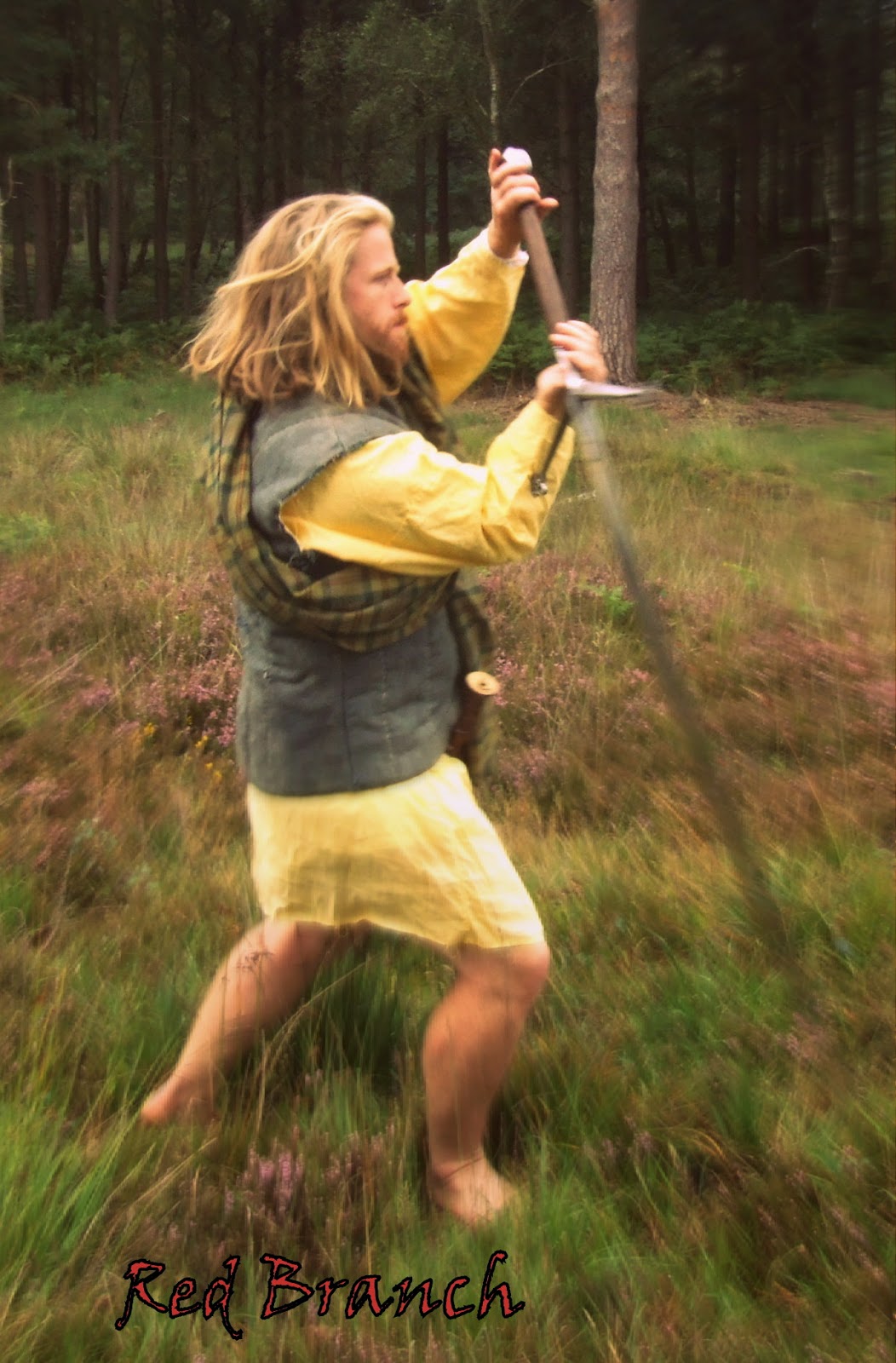 Shoes:I opted for bare feet as I dislike the brogan I own, the evidence suggest that barefeet were extremely common in both Scotland and Ireland, and before modern manufacturing methods going barefoot was probably far more practical. Even Anglo Saxon art portrays men going barefoot and this may have been a widespread feature in history.  Wet turn shoes are very slippy while not offering much in the way of protection. How far up the social scale one had to move before shoes were encountered is something of a question. I suspect that the more senior figures and mercenary troops wore shoes of some description much of the time, certainly this is what period art portrays. With more time I would have tried to acquire or commission shoes in the manner of Deheeres redshank. I go barefoot a lot of the time and even though the heath we shot on looks like upland Britain it is actually quite dry, with a number of spiky plants not commonly seen in wetter environments. I was pulling gorse spines out of my feet for about a week afterwards though at the time had no problems running and leaping about.
Armour: 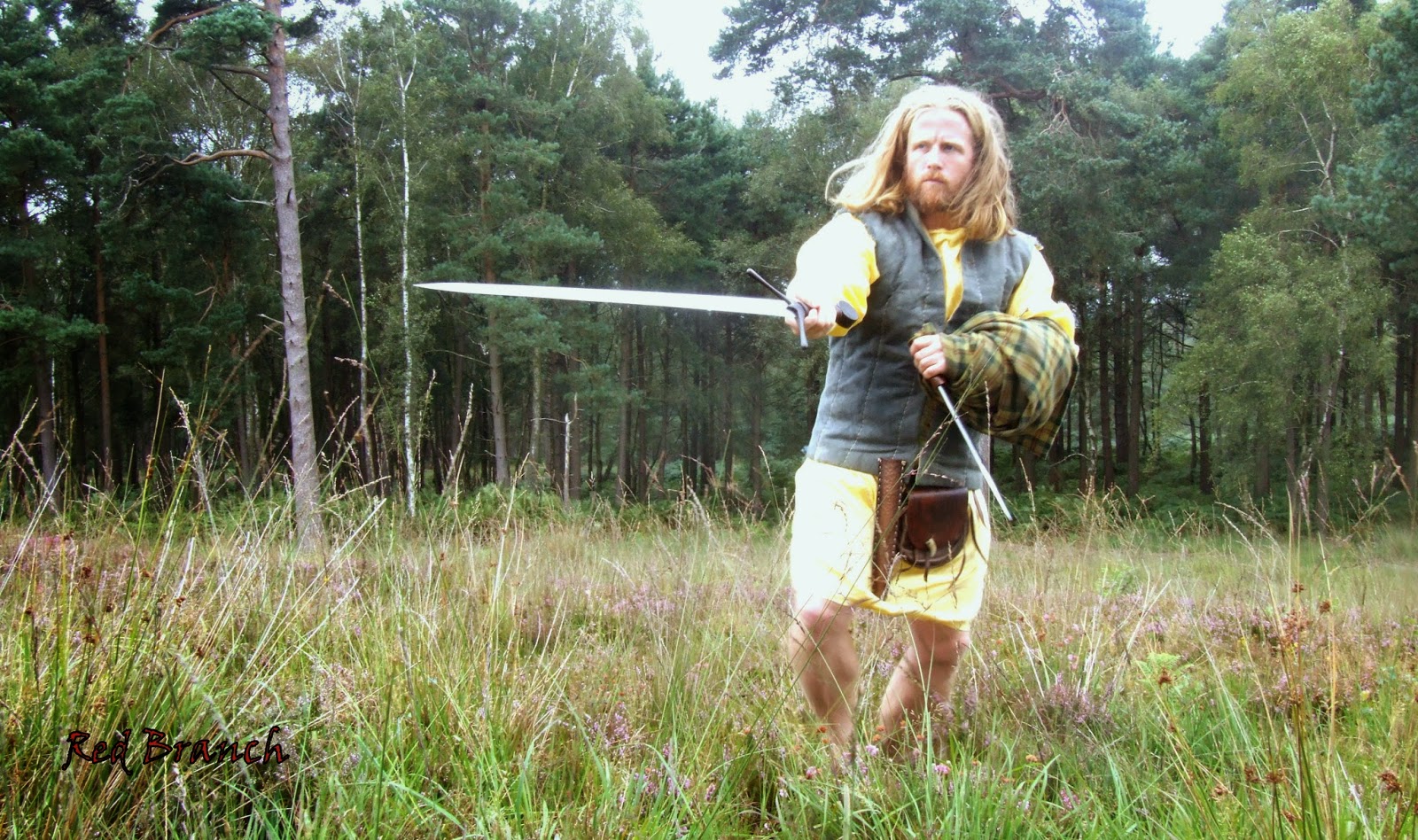 Yes this is where I took quite a major liberty. There is an Angus McBride illustration of Flodden which portrays highlanders in sleeveless jacks. It is a look I quite like, I removed the sleeves of this jack for another project and didn't have time to repair and replace them. Needless to say arms are quite important and protecting them is a good idea. By itself the leine does not look quite right and the sleeveless jack filled the need for some kind of upper body garment. The Ballymote coat reproduction that David Swift uses would be far more appropriate. I doubt you would see a gaelic warrior of any century wearing an armoured garment that I am in these pictures.The Ionar I had  was too 16th century for the 15th century sword so I went for inaccuracy over anachronism.
Ionar: 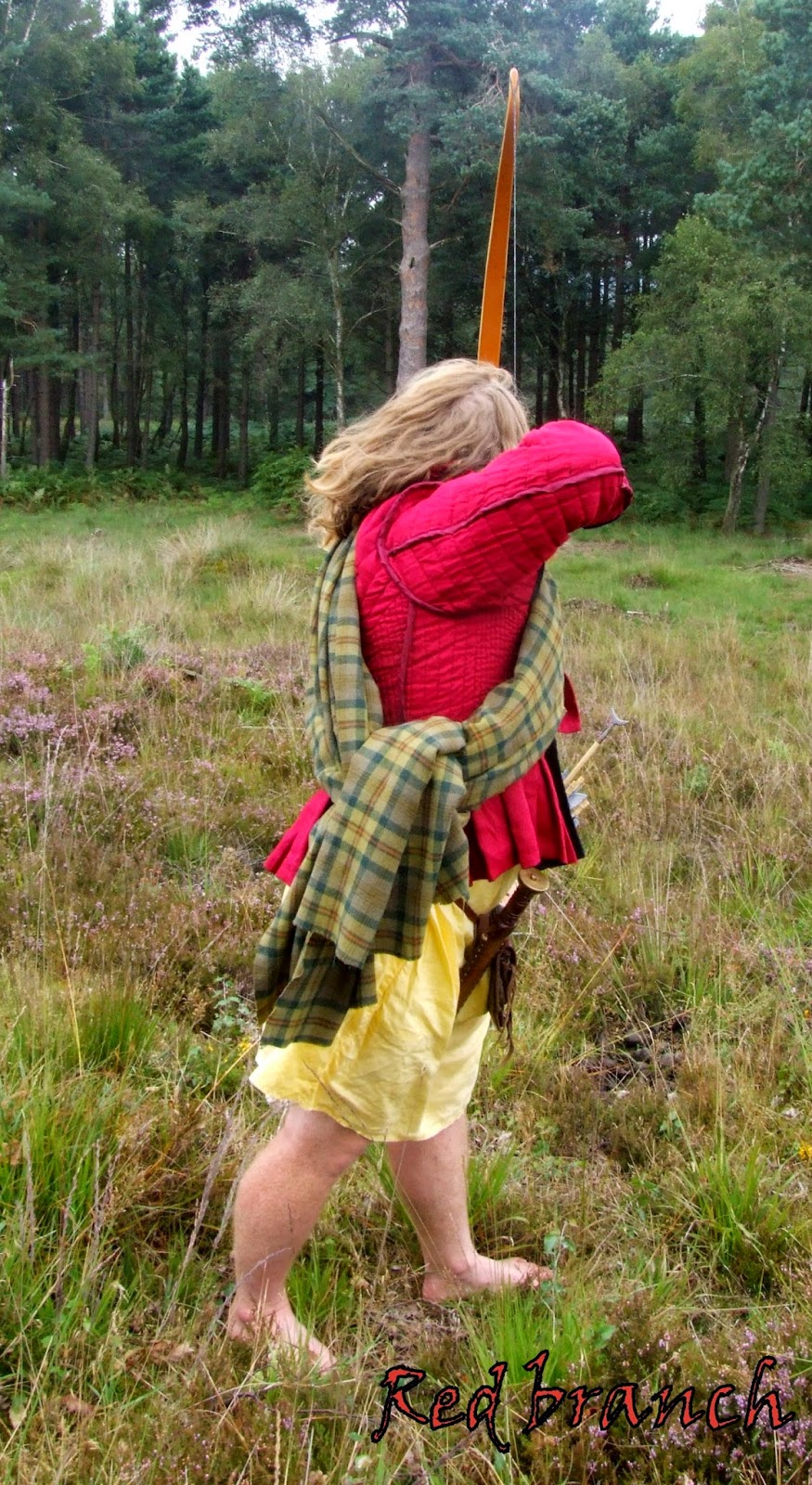 The ionar is a padded fencing jacket owned by Lyell Drummond, he is quite a lithe man so I was pleased (and surprised) to be able to do it up. While the form is as generally depicted I am not sure about the colour though it was  perfectly achievable in period. This is a tailor made garment so was actually quite uncomfortable for me to wear. I could see that made for me it would be a pretty practical proposition especially if made of wool.
Leine:

I opted to go with my Rogart shirt rather than with the 16th Century leine I had borrowed, this was more due to time constraints. Again with the undershirt I was suprised by just how warm this combination of clothing actually is. I suspect the original owner of the Rogart shirt was smaller than I am, I was quite frustrated that I couldn't roll up the sleeves. I should disclose that I am one of those freaks who is too hot in January it would be interesting to try the shirt out in the highlands. The shirt lends itself to dynamism with great freedom of movement. Despite its apparent flimsiness it does see quite a practical option for Scottish weather, especially if made from wool as was the original. Midges however would be another thing, though in fairness I doubt they were quite the problem they are now.
Plaid: 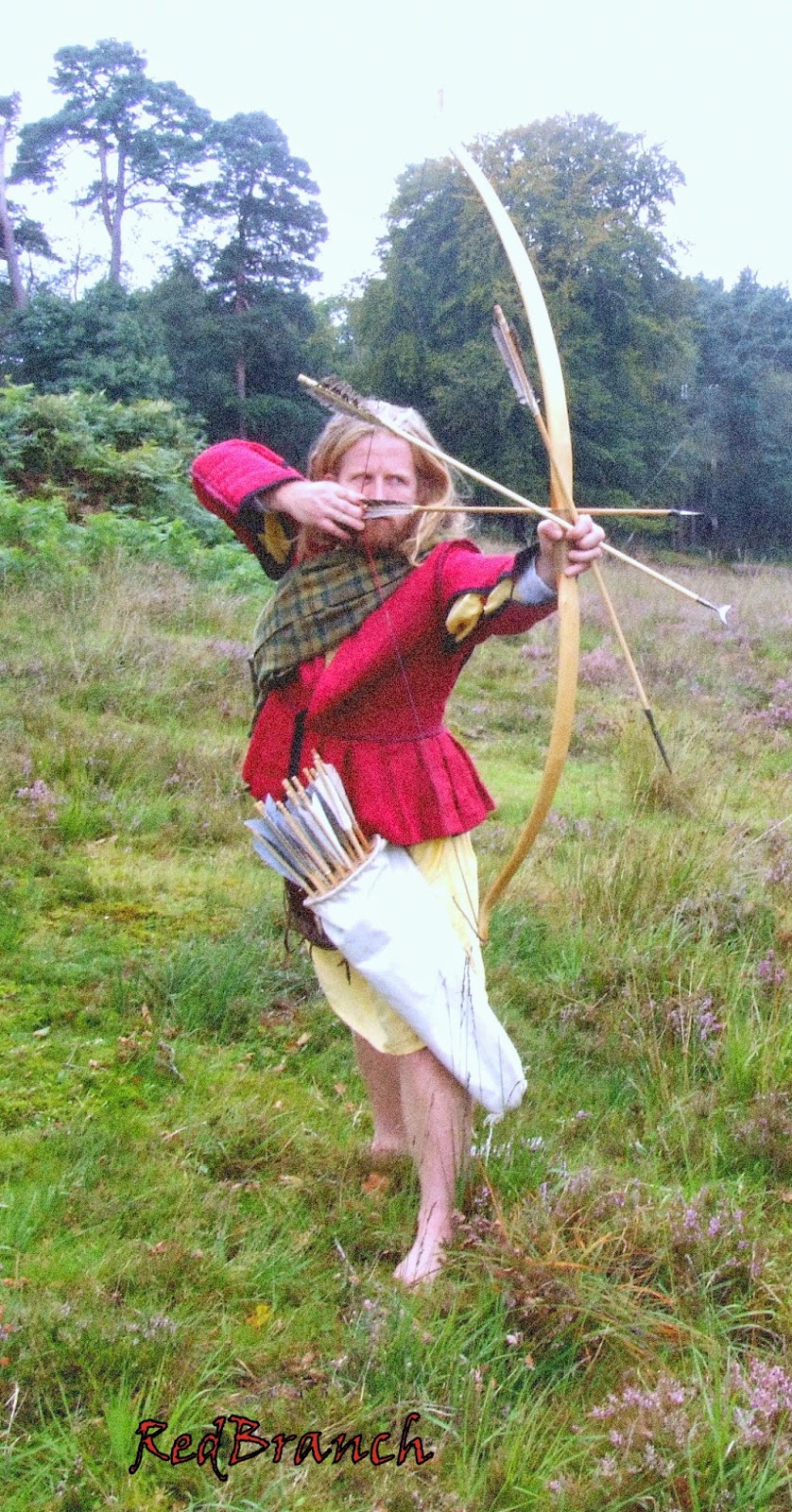 I opted for a non-clan tartan plaid, though this is a full size plaid it looks a wee bit small compared to contemporary images. The plaid was a huge pain and would clearly have been discarded before any kind of action though with a high value they would probably only be dropped if there would be a good chance of getting it back. The plaid kept unravelling and trailing and basically being a huge nuisance though it was well behaved in general movement. I think like a lot of people who have worn them I appreciate the practicality and comfort of cloaks/plaids and sort f regret that they aren't still worn, they look dashing too but aren't much good when activity goes beyond walking or general milling about. Wrapping the plaid around the arm was quite a nice may of dealing with the garment and would be quite protective as is attested to a number of times in history. Lyell Drummond hypothesises that the voluminous leine would provide at least some protection from cutting attacks which would be a nice thing to test out.

In conclusion I think we achieved a good impression that while it is in no way wholly accurate is accurate in spirit. Not bad for a rushed job. The clothing was practical and while quite outlandish to modern eyes manages to effect practicality with showiness within the fairly limited means of people in the Gaelic areas. 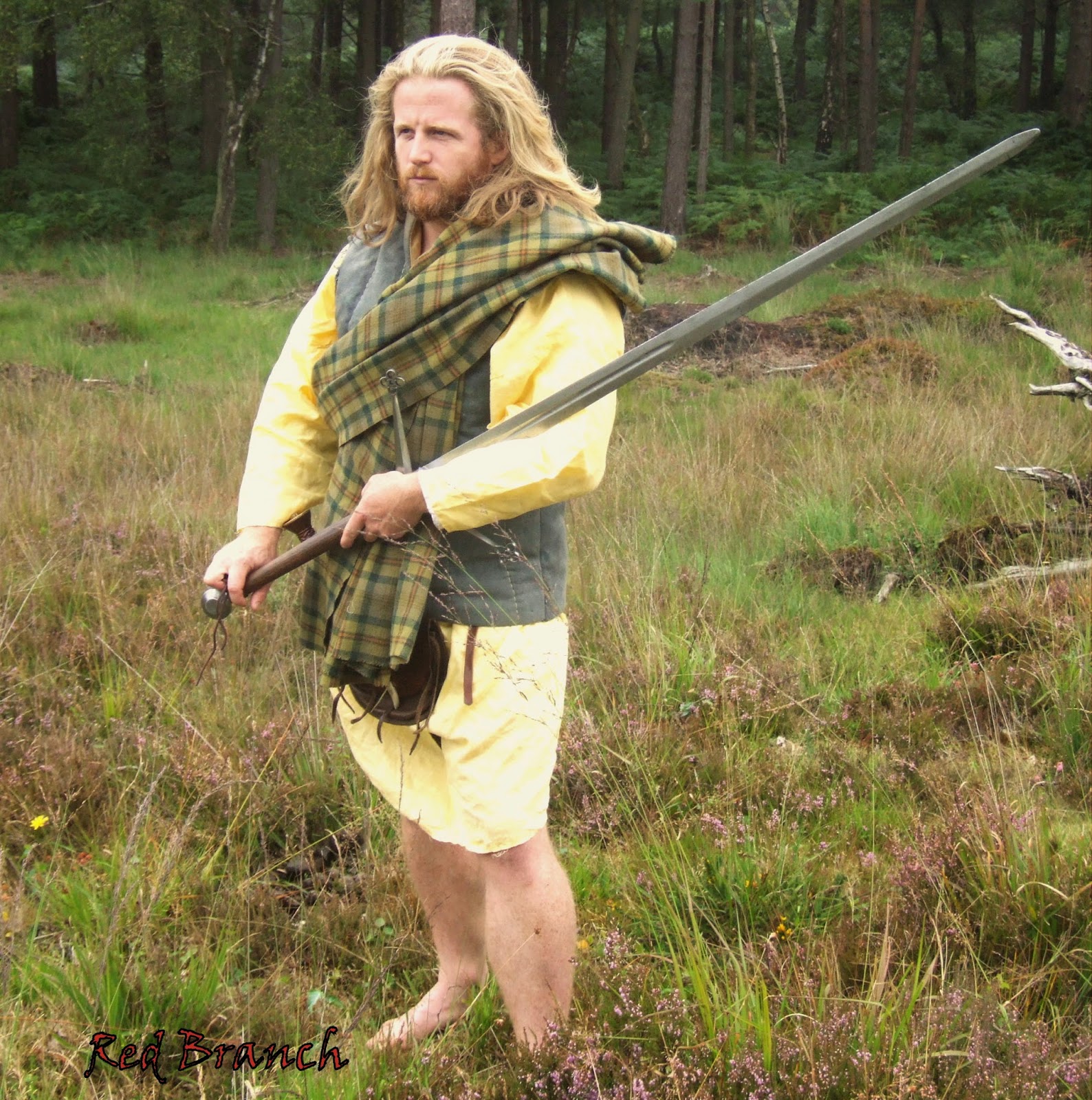