Lets have some music!:

This is my attempt to make a shirt based on the Rogart shirt. This is only the second piece of clothing I have ever made and both garments have been really eye opening. I have had to postpone my Leine order from Dave Swift. As finances have got a bit more interesting over the winter I should be able to commission him to re-start in the spring. It will be better to have a garment made by someone who has a great deal of experience with clothing from this culture and period.Unlike Early Medieval clothing there are very few sources of experience (though some very good sources of information) in this field.

At first I thought that the dimensions of shirt meant that it was unlikely to have been an actual garment anyone would wear.My measurements had it hanging down to my ankles with what I thought would be impossibly short arms at 18". In fact as I was making it I was pretty sure that it was a burial shift or some such. The under kyrtle I made was from a pattern from the re-enactment group the vikings! Was a pretty sophisticated affair but actually not that hard to construct even with my badger like hands. 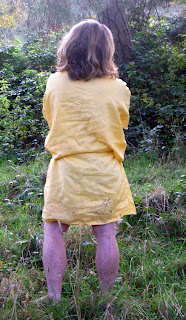 I have sadly made it a wee bit tight across the chest and it rubs a little bit. I did not add armpit gores a feature which could possibly help with this. The kyrtle despite this tightness provides a good amount of movement and I have been able to do kettle bell workouts in it with ease. I wore it to work on the farm but my stitching was not up to the task. I stitched it with shoe linen which is a fairly strong thread, I found the stitching to be, tedious and did not do as good a job as I ought. I did much better job on the Rogart shirt. I actually found the process very rewarding and am looking at making some more garments. The underkyrtle worn with a swanni shirt was also shockingly cold on a November day perhaps reflecting that a much thicker weight of linen would have been used. In fairness swannis are next to no good in wind and it is this outdoor workers opinion that they are pretty useless except for Scottish summers and worn with rainproofs in February. American Pendleton shirts are much better, but I digress.
The sewing is the easy part, it is clear that just the sheer amount of work that goes into making cloth by hand that garments would be incredibly well made and would be highly prized. There are some  Medieval  prices at this site  http://www.luminarium.org/medlit/medprice.html with linen coming in at 8d-1s 3d per yard and wool at 5s. Agriculture was a bit more developed in England and local conditions mean these prices given might not be reflective of prices in Sutherland. At 90" long just for the main body this would give a price around 15 shillings in English money for the Rogart shirt using best wool, which is more than a cow was worth!
However the Rogart shirt was not made from best wool, far from it, it is is actually made from quite poor quality fabric and interestingly has tufts woven into it. This is quite similar to Icelandic tufted cloaks which is interesting given Sutherland's strong Norse heritage, "the south land!"
That the garment is so inefficient in its use of fabric is interesting that the obvious "conspicuous consumption" argument is pretty much mooted by the poor construction of both the cloth and tunic.
How reflective the Rogart shirt is of fashions worn further afield is a pretty good question, the shirt looks different from the later Leine worn by the Irish and Highland Scots. Assuming it was worn without trousers it does seem to be a garment in the same vein and does sort of match the clothing worn by the caterans on the Carlisle charter. 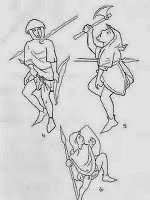 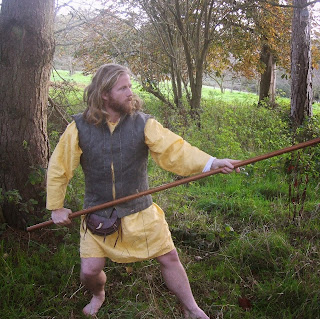 I made my version from linen, originally I cut the sleeves longer but the width of the garment meant that the 18" sleeves fit perfectly. This means that my garment is divergent from the patterns given in terms of the sleeves but not drastically so.
It would appear that the person who wore the Rogart shirt was of similar dimensions to myself. Tall for a 17th century highlander but possibly only slightly taller than average in the 14th century. Hitching the garment up with a belt  as with the later leine means that it provides no resistance to movement and is surprisingly warm. While I still believe that it is an inefficient design it is surprisingly more comfortable and well, wearable than I had thought. Gores would have made a narrower tunic as wearable and have been much more effective with material, but later highland clothing was hardly

conservative with cloth. Possibly it actually was a fashion statement. Though we can only assume that it was a garment worn in life unlike for the bog bodies if it were worn in life it would be quite wearable and even practical. 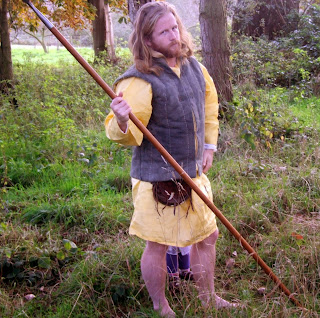 However my daughter says I look "really stupid" in it, an odd comment from someone who dresses like a colourblind parrot. It is rather a brighter shade of yellow than I wanted though not unachievable in period. It just looks a bit bright to modern eyes. The coat I am wearing is based on 15th century aketons for use under harness. It was not made for me and though comfy the maker has a narrower frame. I quite like the look of it though. It is suprisingly effective against swords at only 10 layers but spears and arrows go striaight though it.