The leine which is Gaelic for shirt is dealt with very well on this website;

The earliest possible depiction of a clothed Caledonian comes from a bronze statue from Volubilis, Morocco. The man is wearing the typical “Celtic” dress of checked or tartan breeches and cloak. By the dark ages the inhabitants of northern Scotland, whether a different culture or the same culture by a different name, were depicting themselves. Pictish stones are some of the most impressive cu

ltural artefacts to have survived from Dark Age Britain. Where humans are depicted they are wearing forms of tunic in some cases long but in most a short knee length garment that could easily be described as an early leine. By this time the Irish (Scots) were a factor in Northern Scottish politics and culture and it is hard to know whether the garment was indigenous or a cultural acquisition. The stones are not found within Dal Riada and in fact are about as far away as it is possible to get and stay within Scotland being grouped in the North and East.

The tunic was clearly worn by the majority of the population without hose as Bede refers to the Picts as redshanks. The tunics are shown as quite close fitting with tight sleeves some figures wear cloaks and some tunics which reach the ankle. Later leine were longer and worn tucked up around the belt so this may show such tunics being worn more fully or a different style Compare to the “La savage d’ ecosse” picture on the first post. 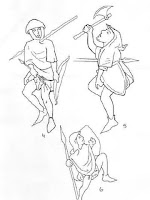 Supposed highlanders are shown on the Carlisle charter which commemorates the successful defence of Carlisle against Robert the Bruce’s army in 1314. The cateran which were presumably drawn by an Englishman are shown wearing strange cloak “things”, helmets or hats and barelegs. It may also be that their cloaks are shown tied between their legs. I have seen no primary source to indicate that they are Cateran rather than lowland Scots. Highlanders are hardly the troops I would ask to 1; besiege a castle or 2; operate a trebuchet, but then again the siege was unsuccessful.

It is from roughly this period that the Rogart Shirt is dated. The rogart shirt is a pretty poorly made woollen tunic that nicely fits the dimensions of a leine it has tight sleeves and would come down to knee or below knee height. It was a gingery colour and striped more detail is here,

it should be noted that there was cultural variation across the Highlands and Isles. Men of Caithness were famous for wearing trousers (as bog bodies attest) so we can take that this shirt which was found in Sutherland as a pattern for what was worn elsewhere even though it seems to fit nicely with other evidence.

The sleeves are close fitting on this garment as opposed to the enormous sleeves shown in the 16th century. The writer of the Albanach article writes that wider sleeves mimicked continental fashions which sounds quite plausible. The de heere Redshank has a close fitting jacket which shows no evidence of wide sleeves beneath. For an earlier period I am tempted to keep the sleeves more tight fitting depictions closer to the 15th century do not show the wide sleeves and on a personal level I loathe the feel of baggy sleeves on modern clothing, so there! However re-enactors (not the most apt term for this group with incredibly high standards) from the group Claiomh have written that baggy sleeves fit into a jacket with no problem.

At 29 1/2 inches wide the rogart shirt would have been plenty spacious enough for running etc, I can find no evidence for gores or other tailored pleats though the pictoral evidence shows folds that could be taken as such but may also be pleated by hand in the manner of a great kilt.

I find this shirt interesting as it is made from wool. Linen has always struck me as a bit of an unlikely material for making a main garment in wet environment with limited arable land. Wool is a bit of a miracle fibre as it does not lose its insulating properties when wet, in fact it gets warmer. While linen is known for its absorbency and cool feel. Although leine are often described as linen I feel that a great many must have been made from wool. Of course with a mantle or jacket a linen garment may have been more practical and indeed a more comfortable proposition. Linen is a hard wearing material and I suspect these garments were made from excellently produced cloth and may well have been thicker than imagined. As most accounts of Irish and Highlanders are of soldiers and mercenaries it may be supposed that the mantle and linen liene were summer options (wars were mostly summer affairs)

I’m sure that linen was or could have been used by at least the social elite; linen requires valuable arable land for production in an area where many had to “make” fields or lazy beds from sea weed or organic matter. Wool is easier to obtain in a land of good pasture and also provides valuable meat and milk. I don’t know if the weaving innovations of mainland Europe were felt in the highlands but cloth did become cheaper during the medieval period and could have been imported. A cateran of some means may have had a linen leine but I suspect that most of the rural poor or less well off highlanders used wool.

'Saffron dyed' is the usual contemporary note on the colours used but as we have seen the rogart shirt was striped. Contemporary couloured illustrations provide confirmation that a yellowy colour was used and it’s probably the safest route to go down. As some have noted other dyes were probably used to get the “saffron” colour according to ability or wealth. Onion skins for example.

There may be some alternatives to the leine. De Heere’s redshank is wearing what look like shorts, some find this so implausible that it is dismissed out of hand but I can honestly think of no reason why such a thing couldn’t be. In fact some of the alternatives are quite laughable “he is naked from the waist down and the shorts were drawn on by offended Victorians”. Hose may well have been worn and possibly was by chieftains and other elite figures visiting the continent or southern cities. However on campaign or up in the mountains it would appear that the Highlander would be wearing a leine of linen or wool with a degree of size dependent on wealth and fashion.

Given the closeness to early medieval tunics I am going to approach thorhild stichery to see what they can do about making a modern garment.

To make the leine work in the driving rain and winds of a highland june we’ll need a mantle or Brat and a jacket. That’s what I’ll look at next, then maybe we’ll get onto the fun stuff like weapons and armour!