I will treat the brat or mantle and the Ionar (jacket or coat) in one post. There is plenty of good evidence for the brat and what it looked like. I suspect that at least some were tartan and that the belted plaid was simply a new way of donning the brat. The plaid is known to have been worn in the last decades of the 16th century just as the climate in Europe got very cold. It’s a little too neat I suppose but it is interesting that the earliest depiction of a highlander in a great kilt is also wearing a blue bonnet and hose.

Like the later plaid highlanders may have slept out in the brat and used them in a broadly similar manner, maybe belting them up in colder weather and discarding them in warm. They may have been tailored in a rough semi circle like the dungiven cloak they would almost certainly have been made from several pieces of cloth sewn together and not necessarily matching. The cloth would be sewn along its length as the looms of the time were not so wide. “The brat or plaid is described as being 12 to 18 feet long by about 5 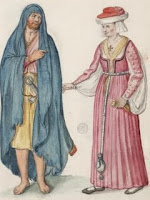 feet wide, being made of two strips of cloth about 30" wide sewn together lengthwise, with fringes” (McClintock).As I have a fine bolt of non-clan tartan I shall use that. As there is less evidence for tartan being used and is evidence of plain coloured plaids it would probably be more prudent to go for a single colour. Red features on de heeres redshank and on the reclining highlander on the Campbell of Glenorchy geneaology so might be a good idea. That said this quote of "heland tertane to be hois to the Kingis grace" comes from the accounts of James V so though a hundred years later shows that tartan was 1; worn before the adoption of the great kilt and 2; associated with the highlands and highlanders.

I have read about skins being worn, the “savage d’ecosse” maybe wearing some kind of lined brat or perhaps a skin, but the shaggy effect is possible (and historical) with wool. Icelandic cloaks were apparently famous for being shaggy in appearance. I’m not one for skins really it always seems a bit “Hollywood” and is quite hard to place among Europeans historically. It is certainly possible though. 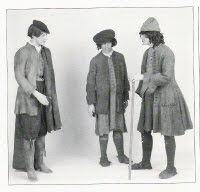 There are some depictions of coats being worn in later periods and for the main they follow (like most stuff) the Irish pattern. The later bog bodies from the Lewis Sutherland and Shetland were wearing coats and were hardly rich men. It would seem reasonable that coats of some type were worn. However for the medieval period there is not a lot of evidence for what form the coat would take. We can’t use Ireland either as there is no evidence from there

Some amount of conjecture is going to be unavoidable One thing is (like later coats) wool would be the material chosen. Colours can come from the palette available. Our best bet is from this grave slab. The figure after the galloglass wearing a full length leine or robe an over garment and then possibly a coat.

This garment may not be a coat it may be a jupon the vertical lines certainly give the impression of a piece of armour. However everyone depicted on stones seems to be wearing armour if you start counting vertical lines as signs of padding. Another option is the depiction of Noah from the Irish book of ballymote. Here is a modern reconstruction by David swift this is part of a 16th century kern impression. It looks very close to the hebredian coat and more than similar to the Noah coat.

It would seem that this would be our best option with an eye out for anything that luckily pops up out of a bog......I'll not hold my breath! 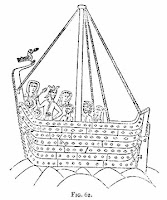