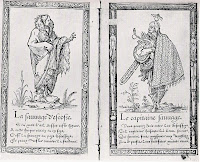 I have had to re-boot this blog.


“From the ground up”

Building an impression of the mediaeval Highlander.

I intend this blog to be a kind of diary of my attempt to recreate the medieval highlander. I have been interested in Scottish history for most of my life and have found the lack of modern material on the medieval highlanders to be quite interesting and even perplexing. There isn’t even an osprey book on the subject!

I am not a re-enactor or living historian or anything like that I just thought it would be instructive to try to recreate a living reconstruction using the best of the sources that I can. I will be trying to recreate a Cateran from around the time of the battle of Red Harlaw. As this seems like a pivotal moment in the history of the relationship between north and south Scotland. http://en.wikipedia.org/wiki/Battle_of_Harlaw

Sources; there are the written sources such as John Major’s work, artwork and artefact or archaeological evidence. I think these three used together can produce a strong evidence base. I will be referring to contemporaries in Ireland for comparison as there were strong links between the two areas however I will always side with the Scottish sources as there were some clear differences between the cultures.

We’ll start with the ground and work up the ground, the feet…………..