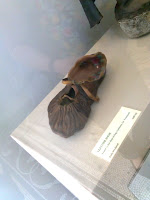 Anyone who has tried to camp in the mountains of Scotland is aware of one overriding fact of the Highlands, they are wet. Very wet a sponge stretched over rocks one might say. The environment gives all shoes even very sophisticated modern shoes a very hard time.

It seems that In Scotland, Wales and Ireland many people solved the problem by simply not bothering to wear foot wear at all. To modern people used to walking on pavements wearing big cushions on their feet this often seem slightly, well unreal. But it certainly does seem that footwear was optional in the Scottish Highlands until quite recently.

Of course there is no archaeology for wearing no shoes but there is plenty in the art work from slightly later periods. The Stettin Prints the wood cuts from the Holinshed chronicle Durers image of the Galloglass etc, etc. There are accounts of highlanders marching through to Derby barefoot in 1745. Edmund Burt relates that highlanders walked along side the roads the British Government had built saying that they were too painful to walk on. He said that he doubted it was their pride (unlike the Spanish) as highland cattle would not use the roads either.

So a medieval highlander can be shod very cheaply. In my case I am frequently barefoot and wear minimalist footwear for sports and general life. As an aside I won’t run in barefoot running shoes on modern surfaces I suspect we will see a whole load of injuries from this new barefoot running movement. We may certainly not be evolved to run in shoes but we are equally not evolved to run on hard concrete surfaces I only use them for trail running. It may sound funny but feet that are used to wearing shoes develop differently and as a modern person it can be a real challenge to walk barefoot for any amount of time. In addition we have the modern joys of broken glass and other litter.

Tough as the highlanders may have been there must have been provision for the colder seasons as it would have been impossible to have avoided frostbite for much of the winter Though extreme, temperatures dip as low as -25 and -30 degrees C no amount of brown fat cells or rough native endurance will save a person’s toes in such weather. Moreover many images of Highlanders do show some footwear being worn even the most ragged of the Penicuick highlanders are shown wearing hose and shoes.

Commonly we see the highlander brougue, curran or ghillie as a kind of long laced thin shoe akin to a moccasin. We are told that these shoes are made from rawhides with the hair outmost and slit to allow water to escape. I have a pair of shoes made by the reenactor Paul “Tod” Booth they are made slightly more robust for modern feet but he assured me that they were designed from an historical example. 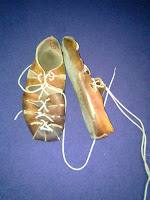 They are made from tanned leather rather than rawhide (Burt describes rawhide shoes as particularly noxious). This type of shoe is seen in some of the 19th century anachronistic paintings by R.R McIan and on a fallen highlander in the famous morier painting. This type of footwear is well known in ancient archaeology.

Older images seem to show foot wear of a slightly different type, fully enclosed footwear of the same thin designs . Having made both types I have to say that the enclosed bag-shoe or woodland moccasin is quite easy to make and is sparing of material more so than the tabbed “brogue” design. I don’t know whether this shows a change in fashion or whether the two types were worn together. As there is no (or I can’t find) iconographic evidence for the “Brogue” type before the 17th century it would seem to be more prudent to look at other alternatives. Unlike southern shoes they do not appear o be overly pointed or piked and indeed look very similar to what we would call moccasins. The de Heer picture of the 16th century Redshank show shoes that look very similar to shoes worn by all sides in the Anglo Irish wars of that century.

Shoes should have a thin sole to facilitate grip. They can be made of leather (bog bodies) or rawhide. The idea of rawhide shoes is frankly repellent and as Burt attests highly smelly. Such foot wear does wear out quickly so tolerating the smell may have been expedient it does seem a bit odd to me, but with everything being made by hand and no industry to speak of, tanning leather to make shoes may have been a job too far for self sufficient communities. I can only imagine that in the wet environment of the mountains rawhide shoes were slimy and sticky nearly all the time. Needless to say I don’t want any and will buy/make my shoes of leather. The Tudor slip-ons from this make seem like a good copy of shoes seen in de heer’s Redshank though perhaps a bit robust. http://www.pilgrimshoes.co.uk/

I suspect that shoes of tacksman and chiefs were quite well made but lower down the hierarchy they were probably made by the wearer themselves or a family member. Later on in the 17th- 18th century Highland gentry wore buckled, heeled shoes common in other parts of Europe though wore currans in the field.

To date I have found no image of a highlander wearing any form of leg clothing before 1600, indeed the name “redshanks” comes from the habit of going bare legged. Indeed this habit is commented on in Viking sources. Magnus Barelegs in fact got his name from his adoption of Henredian fashion. Some have suggested that warriors on the grave slabs may have been wearing hose or more of a stretch that de heer’s redshank is wearing hose and the picture was doctored by Victorian prudes.

For a reconstruction of a highlander before 1600 one simply cannot wear any form of leg covering as the evidence is not there . Having said that it is quite hard to imagine that nothing was worn during adverse or winter weather. Burt includes a sketch of a highlander wearing both plaid and trews which he says was not unusual. Leg wraps were probably worn and of a similar style to later garments I have read that the Irish some times wore trousers with their Leine in winter. Trousers or hose are possibilities trews were worn in the highlands by the Gentry and those with specific jobs like ferrymen. However a quick jaunt up nearly any mountain shows that your expensive tailored trousers are quickly muddied and soaked, fine in the modern world but more than an annoyance in the past.